The quad touch peripheral responds to four independent capacitive touch inputs. The Touch4 card has four counters which change frequency when a finger touches one of the inputs. The touch4 driver in dpdaemon keeps the average (over a minute) for all four counters. Touching an input adds capacitance and lowers the output frequency. The driver detects this change and reports the change to the 'touch' resource. 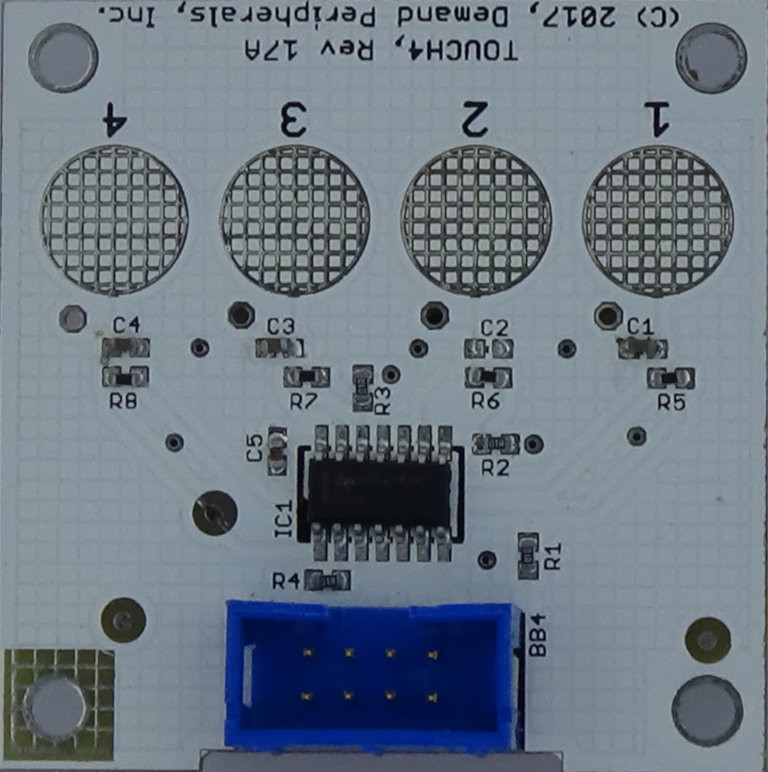 The Touch4 card has four counters that change frequency when the user touches one of the inputs. The FPGA measures the frequencies and reports them to the host every 60 milliseconds. The board has four pads for input but you can add remote sensors by connecting to a feedthrough hole near each pad. More information about the TOUCH4 card is available here cards/touch4.html.

thresholds : percent change in frequency to signify a touch event.
The thresholds resource lets you control the trade-off between sensitivity and noise immunity. The default value of ten percent requires a firm press on the contacts but is very immune to noise. In most applications a threshold of three to five percent should work. This resource works with dpset and dpget.

counts : raw frequency counts. You can see the raw counts from the FPGA using the counts resource. The counts reported are the number of transitions (both positive and negative) at the corresponding input in the sample interval of 60 milliseconds. You can use the counts resource to see the change as you touch an input. This can help you set the threshold appropriately.

Set the thresholds to five percent then start watching for touch events.