The Text Interface has the most common user interface elements including a keypad interface, a text LCD interface, a rotary encoder with center button, LEDs, and a simple tone generator. 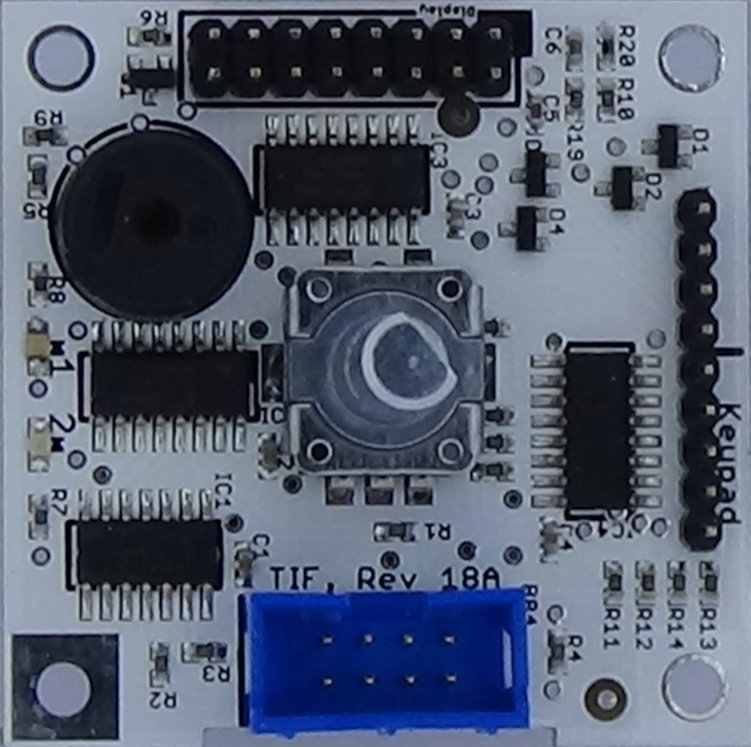 The Text Interface Card has a rotary encoder with center button, a piezo speaker, two user controlled LEDs, a 4x5 keypad interface, and an interface to a text LCD display. More information about the TIF cards is available here cards/tif.html.

encoder : rotary encoder and center button status.
The count is positive for clockwise rotation and negative for counter-clockwise rotation. The count is incremental and report just the change sine the last report. To get a position from the rotary encoder you will need to sum the counts as they come in. There are 96 counts per full rotation. This resource works with dpget and dpcat.

Note that the encoder is mechanical and turning the knob too quickly might not allow the contacts to close. This will appear as missing counts.

Pressing the center button on the encoder give a button value of 1. A zero indicates that it is open.

tonegen : tone to play on the speaker. The tone to play is a space separated triple of duration in milliseconds, the frequency as digit, and 1 bit volumn setting. Duration must be positive and is limited to a maximum of 310 milliseconds. Frequency is a digit in the range of 1 to 4 with the following meaning:

The piezo responds best at the higher frequencies and the low frequencies will not sound as loud. A typical invocation might appear as: Tonegen is a write-only resource that works with dpset.

text : characters to display on text LCD. Text is a write-only resource that displays printable ASCII characters to on the attached text LCD. Text LCD displays do not scroll automatically. To work around this the driver moves the cursor to the other line every 16 characters. (20 character display? Change WIDTH in the tif driver.) A typical invocation would write out all 16 character of the line at once. For example:, a shell command to print one 16 character line to the LCD might be:

commands : commands sent to the text LCD. Commands are sent as a string of two digit hex characters. Commands let you initialize the display, set the cursor position, and control whether the cursor is visible or not. Commands are specific to the LCD controller in the display module but common commands include:

Some displays are much slower than others and you may find that you need to repeat a command in order to give it a little extra time to execute. (You usually do not need a delay when sending text to the display.) As an example, a reasonable LCD initialization command might be:

Reinitialize the text LCD and display "Robot Ready! " using the command line tools. That is, the following are entered in a shell script or at the Bash promot.

Turn on the LCD backlight, sound a beep, and then start monitoring the keypad.