The DC2 peripheral controls the speed and direction of two brushed DC motors using the D7HB H-Bridge card. The motor speed signals are pulse width modulated (PWM) signals with a programmable PWM frequency and a duty cycle between 0 and 100 percent. 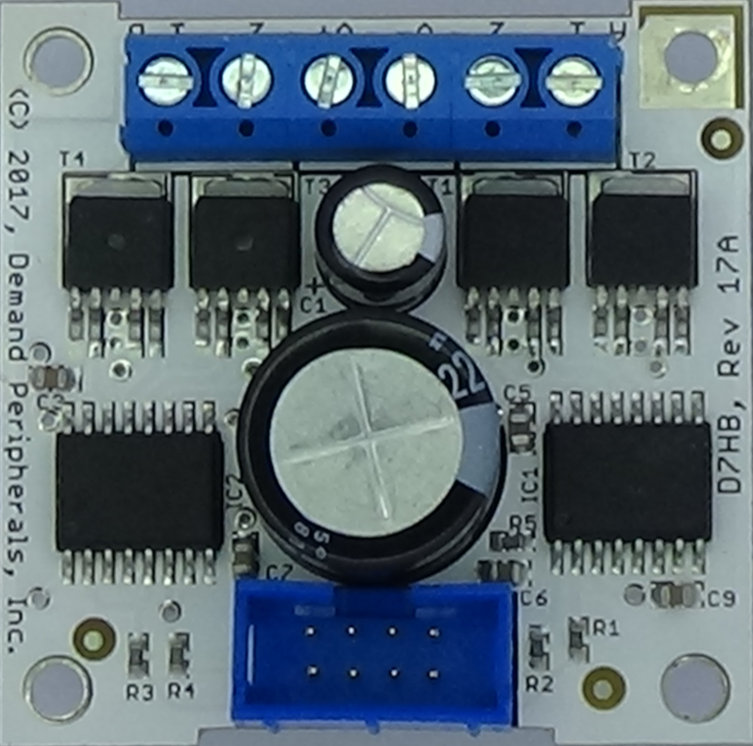 Resources let you control each motor as well as set the PWM frequency. A watchdog timer can shutdown both motors if the host stops writing to the peripheral.

mode0, mode1 : mode of operation for the motor.
The mode is encoded as a single character with the codes assigned as follows:
b -- brake (power on default)
f -- forward
r -- reverse
c -- coast

power0, power1 : PWM 'ON' time as a percentage.
The speed resolution is 10 bits for PWM frequencies below 20 KHz. The speed resolution is 8 bits for a PWM frequency of 78 KHz. Reading this give the _current_ speed. Writing it sets the _target_ speed. Current speed is subject to the constraints of slow start and slow stop so the current speed and the target speed might not be the same. That is, when you read the speed you might not immediately get back what you wrote to it.

Set the PWM frequency to 20KHz, put both motors into forward mode, set the watchdog timer to 500 ms, and set the PWM percentage to both motors to 65 percent.