Verilog Developer's Guide for the Baseboard4

How to Get Started with Verilog

Most programming languages have a sample application that prints the phrase “Hello, World!” to the console. This application is often used to validate the installation of the language and its tool chain. For microcontrollers and FPGAs the equivalent application usually flashes an LED on the development board. The Verilog program below implements a counter on the Baseboard LEDs. Save the following as counter.v

Have you ever seen a circuit board with gold or copper fingers for the connector? If so, you are already familiar with the idea of a module. You can think of Verilog modules as a complete circuit boards with the names of the connector pins given in the module definition. The Top Module connects to the FPGA pins directly and it is to the top module that the other modules connect.

Think of this counter module as a circuit board with nine signal pins on its edge. In this case there is only one module, so the counter module is the top module.

Clearly the code inside the module describes the digital circuitry on our imaginary circuit board.

You already know that a register is just an array of flip-flops. In Verilog you create a register using the reg keyword. You have to tell the compiler how many flip-flops you want in the register by specifying the upper and lower flip-flop numbers.

You can tell the Verilog compiler what values to place in registers when the FPGA is loaded. This is called the initial value of the register. Do this with the initial construct.

The left hand side is the input to the count register and the right hand side is the output of count plus one. The output of an edge-triggered flip-flop is given a value only on the edge of its input clock. Register assignments must appear inside a block that defines the clock source for the registers. That is what the always @(posedge CK12) line does. Verilog uses a special syntax to show an edge-triggered flip-flop assignment. That is the <= syntax. This can only appear in a block with a clock source. Some flip-flop schematic symbols use a tiny triangle at the clock input. You can think of the < in <= as that clock symbol.

sets the value of LEDS to the high eight bits of the counter. Just as you should not drive a wire with two different output, so Verilog wants just one output driving a wire or input. The following will generate a Verilog compiler error.

If you have enjoyed this introduction you may want to get more information from one of the many books and on-line tutorials for Verilog. The Wikipedia page is both simple and fairly complete (https://en.wikipedia.org/wiki/Verilog). While the compiler can flag many errors it can not identify logic errors in your design. The easiest way to spot logic errors is to use a simulator that lets you look at each signal in the circuit.

The word “Verilog” is a combination of the words verification and logic. It was originally a hardware describpiton language intended as a simulation tool to test and verify circuits. Only later was it used as input for circuit systhesis. Most commercial Verilog compilers include a simulation tool. In this section you will see how to use the open source Icarius Verilog (http://iverilog.icarus.com) to simulate your counter.

The simulation environment for a circuit is called a test bench. Recall how you were asked to think of a module as circuit board. Think of a test bench as a motherboard that into which you plug your module. This motherboard will have drive all the inputs on your device under test and be able to change those inputs based on how many clock cycles have passed. You can view all of the internal signals and the output signals with the output of the simulation.

Install iverilog and gtkwave on a Debian system with the command:

Save the following as counter_tb.v

Run the simulation, convert the output to a gtkwave format, and display the results with the commands: 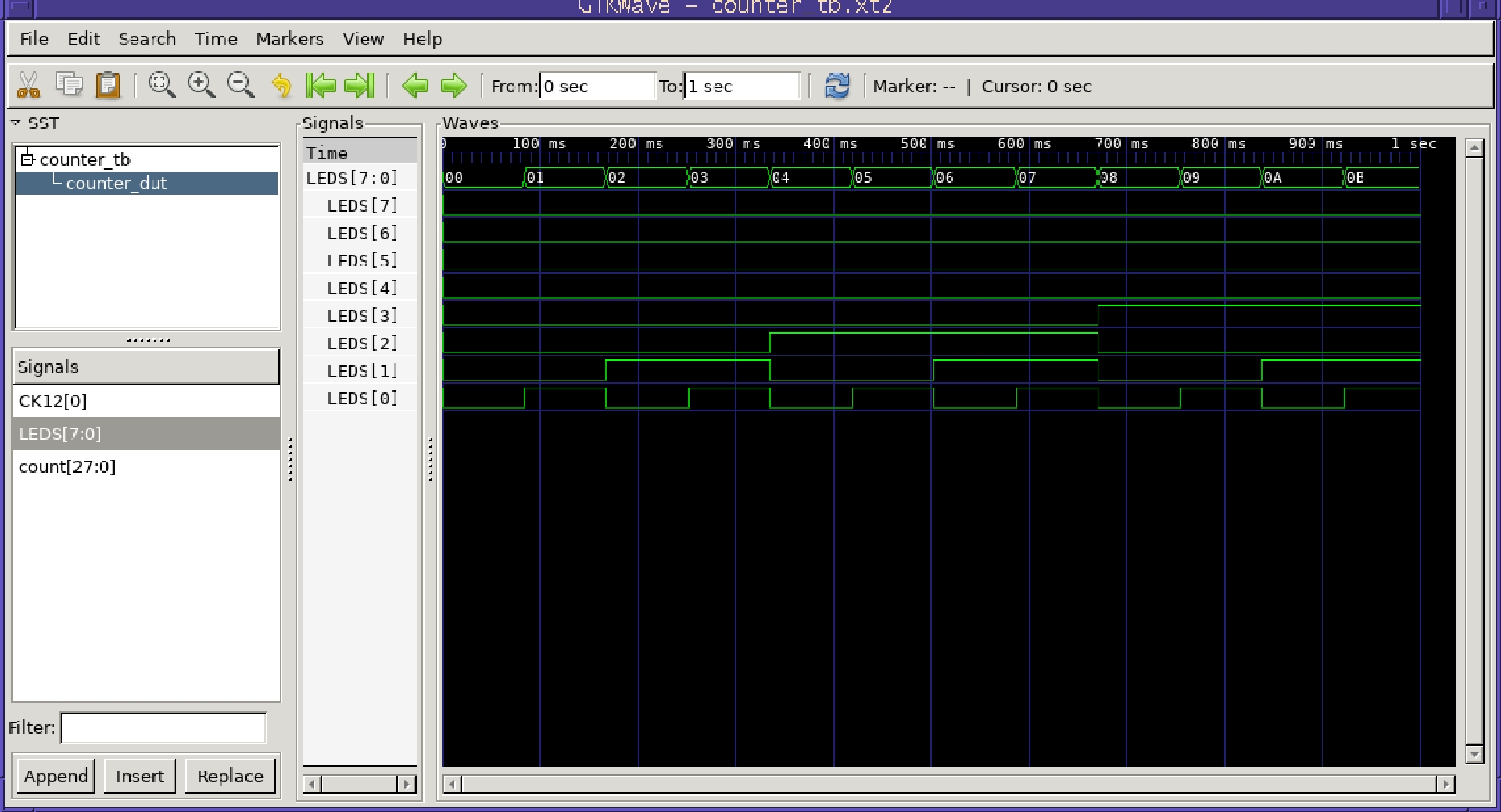 Install and Test the Xilinx Toolchain

Once your simulation output is correct you are ready to compile and download your design to the FPGA. This section describes how to install the Xilinx FPGA design tools, how to use the Xilinx command line tools to compile a Verilog design, and how to download the compiled code to the Baseboard. A later section will describe how to automate all these steps in a Makefile.

The Baseboard uses a Xilinx Spartan-3E and a USB interface for both downloads and a host interface. Since the Baseboard is downloaded through a USB serial port you do not need a JTAG cable or dongle.

Xilinx provides a set of free design tools, ISE, which are part of their WebPACK download. To get the WebPack download you have to select it, register with Xilinx, and start the download.

Start by going to the Xilinx download site at: http://www.xilinx.com/support/download/index.htm. Click on “ISE Archive” link and select “14.7” and then “Full Installer for Linux”. This will take you to a login page where you can select “Create Account” (since you probably don't already have a Xilinx account). You activate the account using a token sent in email. Your first login will present a page asking you to verify your name and address. The download starts automatically after selecting Download at the bottom of the name verification page.

Install the software by untarring the download file and running the “xsetup” script in the top level directory. If installing as a non-root user, you might want to create /opt/Xilinx/14.7 beforehand and give yourself write permission on it. You should be able to install ISE in a virtual machine but it might not install correctly in a docker image.

The installation will ask which products to install. We suggest the “ISE WebPACK” as it is the smallest and has everything you'll need. You need to “Acquire or Manage a License Key” but you do need to install the Cable Drivers. Selecting Next then Install should start the installation.

Once the installation is complete you can add the Xilinx Verilog compiler toolchain to you path and verify that it can be found with the commands:

By default, ise opens a graphical integrated development environment. DPcore is make based and you do not need to learn the IDE. You may recall that compiling a C++ or C program is broken into the steps of preprocessing, compiler pass 1, compiler pass 2, assembly, and linking. All these steps occur even though you only type g++ or gcc. In the same way, Verilog is compiled to binary in several steps.

Before compiling your Verilog to an FPGA binary you need to tell the compiler how the wires in the Verilog module map to the physical FPGA pins. Xilinx uses a “user constraints file” (.ucf) for this. The minimum UCF file for your counter is shown below. Save it as counter.ucf

The commands that Xilinx uses to compile Verilog for a SPartan3 can be hidden by a Makefile but you might be interested in the steps involved. There is insufficient space in this tutorial to give detailed descriptions of the commands. Your download of the Xilinx tools includes comprehensive manuals for the Xilinx command line tools which you can consult if you are interested. Look in ISE/doc/usenglish/books/docs/. The following paragraphs give a brief overview of the commands involved.

The first command, xst, synthesizes the Verilog file into a hardware design that is saved as a netlist file with an .ngc extension. Xilinx's xst program is actually a command line interpreter and it expects input from standard-in. Use an echo command and a pipe operator to give xst input from standard-in if you want to keep all of your build information in a Makefile.

The ngdbuild command further decomposes the design into FPGA native elements such as flip-flops, gates, and RAM blocks.

It is the ngdbuild command that first considers the pin location, loading, and timing requirements specified in the user constraints file, counter.ucf. Like the other Xilinx commands, ngdbuild produces several reports but its real output is a “Native Generic Database” stored in a .ngd file.

The Xilinx map command converts the generic elements from the step above to the elements specific to the target FPGA. It also performs a design rules check on the overall design. The map command produces two files, a Physical Constraints File file and a Native Circuit Description file, that are used in subsequent commands.

The map command produces quite a few reports. As you gain experience with FPGA design you may come to rely on these report to help identify design and timing problems.

Output processing starts with the bitgen program which converts the fully routed FPGA design into the pattern of configuration bits found in the FPGA after download.

The bitgen program lets you specify which clock pin to use during initialization and whether or not to generate a CRC checksum on the download image. Files which contain a raw FPGA download pattern are called bitstream files and traditionally has a .bit file extension. Bitstream files are good for downloads using JTAG but since we're downloading over a USB serial connection one more command is required to convert the bitstream file into a download file.

The promgen program is a utility that converts bitstream files into various PROM file formats. The format for the Baseboard is called bin so the promgen command uses the -p bin option. The output of promgen, counter.bin, is what you download to the Baseboard FPGA card.

All of the commands described above, including xst, ngdbuild, map, par, bitgen, and promgen have excellent PDF manuals in either the ISE/doc/usenglish/books/docs/xst directory or the ISE/doc/usgnglish/de/dev directory of your WebPACK installation.

When the Baseboard powers up or after pressing the reset button the FPGA waits for an binary image from the serial port. Linux serial port drivers can suppress certain characters from an output stream. To prevent this you need to turn off post processing on the serial port.with the commands:

Press the reset button and send the FPGA binary to the Baseboard with the command:

If all has gone well you should see an up counter on the Baseboard LEDs.